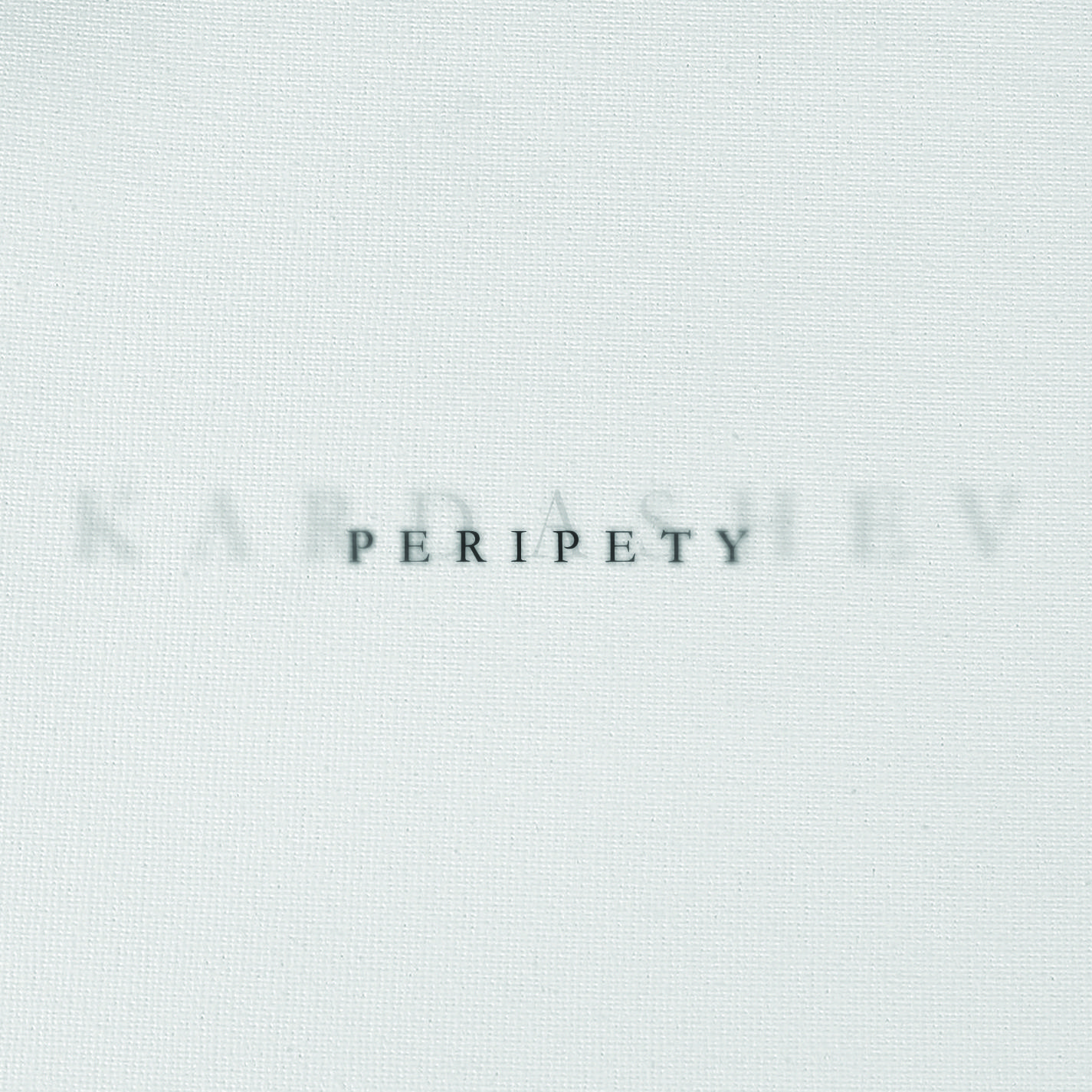 Peripety breaks away from the Kardashev mythos, a hopeful story of our far off future, and explores themes of purpose, meaning, and responsibility. It faces the realization of one’s own place in a vast, primarily empty existence. Who are we to speak of morality? What does it mean to accept that we all die? Is the human spirit tangible, or an outlining shadow eclipsing the sunlight? Peripety brings forth questions, and offers no answers. However, beauty often sits around the corner, and we are ever curious about what we do not know. Musically, these tracks were an exploration in cohesive musicality with a “glue” blending all of the songs into one fluid listen.

Peripety is a concept album focused on the idea of becoming aware. The moment at which knowing is born from ignorance and experience. The album conceptually explores what it means to grow in experience. Specifically comparing the concept to the allegory of waking from a deep slumber.

The album was originally named “Gradient” as it was meant to visually movement from dark to light, start to finish. Early demo titles for the opening and closing songs were named Charcoal and Light as an illustration of conceptualizing the motif. Eventually, the concept developed into the beauty of the Latin language as it lent mystery and enrichment from an artistic standpoint.

This album bridged many firsts for Kardashev. It was the first full length album they would release. Their first collaboration with other musicians outside of the band members. The first album with humming as a vocal choice. The first crowd funded album and their first fully marketed release and a perfect album to play front to back with a runtime of 38 minutes.

In 2014, while the band was writing IOTA, they would spend much time sharing concepts and ideas about the human condition with one another. One of those ideas was delivered by the most unsuspecting of people; Mike Rowe.

Mike Rowe was featured in a TED talk about his experience in Dirty Jobs on The Discovery channel. In that feature, he explained his experience across the show’s length in a beautifully entertaining, profound and succinct message suggesting that maybe convention is not perfect and needs to be reproached periodically as processes, cultures, societies and values change across time.

The experience of this speech was so alarming that Nico took muse from it and suggested the name Peripeteia or Anagnorisis for the album as Mike Rowe had explained the classic concepts in his speech. Mark took these concepts and found a variation in the word that would fit more aptly in the naming of the album as “Peripety”.

Musically, this album was influenced by artists like Aegaeon, Fallujah, and Gojira. However, it was about this time that concepts began to transcend genre for Kardashev and they found purpose in the simplicity of Brian Eno, Steve Reich and Imogen Heap. These unsuspecting influences drive the “different” that Kardashev was able to infuse into their music.

Visually, Peripety explores the interpretation of “awareness” as a blank canvas taking on creativity in simple, motif-focused landscapes. These images played the part of developed, yet simple interpretations of what it meant to make minimalist artwork that fully embodied the finalization of the human experience process. The transition from nothing to something. From ignorance to knowledge.

The cover of the album is a blank canvas with a very evident tooth implying that as a human, we begin with nothing and decide what to become. This allegory is directly implied through the artwork as each person is different, yet similar in the tools we have to work with.

Each song on this record was meant to flow into the next and flow from the previous. Musically, the songs were to feel like they were opening up into soaring inspirational landscapes.

I am temporary.
Seeded by progress,
formed by Intention.

I am temporary.
I question the assumption
that nothing exists.

I am human…
conscious thought.

This is where all things are forgotten –
Craft of our hands feels nothing as
we fade away.
Meaninglessness –
the first creation.
In every action, in every breath,
strength of illusion.

Torn in two –
the sky breaks like a seed
spreading its blueprint on the Earth.
All things beyond the man-made
culminate and fall…
Passionate. Intentional.
Assault your lungs with the greatest of all war cries –
We are! We exist!

I, The offset –
the only word we know.
Light, alignment –
a truth that can be known.

Veil held across the sun,
only we can burn you!

This is when all things can be sacred –
held to fire.
Removal of all that we know.

Torn in two –
the sky breaks like a seed
spreading its blueprint on the Earth.
All things beyond the man-made
culminate and fall…
Passionate. Intentional.
Assault your lungs with the greatest of all war cries –
We are! We exist!

Steps with no echo.
Breath heard by no one.

What place is this?
Should, and should not –
swaying field of convention.
Knowing and doing simply to choose.

Be still and at peace!

What is the equation of this?
What is the sum of all parts?
Here, all things grow on their own.
Earliest of mornings –
awareness before birth.

It was there –
in my dreaming…
pressed tot he ground.
Every law, and all I had felt
dissolved into sound.

Now I have come to know
that all of this is meaningless
as I fall deeper into love,
waking from this slumber.

I
Once had
Conscious thought.
Are these landscapes
truly infinite?

Thrown into the wind to create.
Held under the dirt for seven days.
Nothing is hastened,
all things are done.

“Then come to me in bright defile,
where judgement day is not a thing
that can be delayed for overlong.” *

Silence at Dawn.
Everything in its place.
Slow moving tides reflect cinnabar skies.
The Earth is beautiful and one day
I shall die.

And now in light, and in knowledge of this…
what must I do?
what must be done?

Millions of embers have gone out
behind my back.
Four hundred billion more
stare at me from the dull horizon.
Where do I stand?
What claim to make?
So I will let the scales fall
from my eyes –
for here in this light I am speechless!

Who am I to speak of morality?

At each core, soft approximation.
delicate abstraction.
Function and Form.
So maintained –
Ceasing acquisition.
True manifestation as I become dust.

Great reversal!
This – a fleeting formation of matter!
Self defined!

Yet now my eyes on a darkened mirror –
seeing everything in part.

Millions stare back! All of our kind!
We will know each other as we are known!

This album was written and recorded across 3 home studios between the years of 2013-2014. After Nico moved out of his father’s house in 2013 to live with Mark in Tempe, and then moving again into Mark’s family home and then finally into another of Mark’s family homes, they began writing Peripety in their home studio owned and operated by Nico. Now living together, the process was much more involved between the two and they began to write more regularly. The process of writing was much more frequent and involved than ever before.

The recording gear and software continued to be the same for their fourth release.

Miah was again the engineer behind the mixing and mastering of this album.

By the time Kardashev had decided that he album would be crowd funded, they’d also decided on the artwork for the album as minimalist landscapes painted by Chris Gerlings. He had made a career of painting in the professional world and as a contribution to the album and album process, he and the band decided that the top ten contributions would each receive one of the original paintings from the album. These artworks were given to very special individuals whom helped to make the album a reality.

Chris set out to paint 10 landscapes in his home studio. Once complete, he had them photographed at a professional studio and then stretched before shipping them out to their forever homes.

This album was distributed by CD Baby to all streaming platforms as a 10 song album.

The physical discs for this album were printed and shipped with incense and a personalized thank you note.

About the same time that the album was released, the band decided that releasing the instrumental album would be an opportunity to reach a wider audience whom didn’t prefer the vocal style of Kardashev, but wanted to appreciate the instrumentation and experience the album’s music.

Something that made this album incredibly unique was that it was completely funded by Kardashev fans. They generously contributed in many ways to bring this album to life. A word of mouth campaign was set forth by the band to reach out to their loved ones and fans wanting to have something completely unique and handmade in return for their investment. Each of those individuals was gifted one of the ten paintings from this album.

Have you ever taken a moment to contemplate how many truly unique things coalesce to form a human being? Flesh, bone and muscle are one thing—an evolutionary miracle in and of itself—but being human transcends tangible tissues and fluids. The mind, spirit and soul are a different animal altogether, and although they can’t be seen or touched, they are just as crucial to the composition of a man or woman as any anatomical structure. Naysayers would disagree—claiming what can’t be seen, touched or otherwise witnessed can’t exist. Kardashev disagree, and with their latest full length, Peripety, they do what some may claim is impossible—they capture the essence of mankind and transmute it into song, portraying the collective consciousness of mankind as an amalgam of brash, blistering heaviness and otherworldly atmosphere, resulting in an album that is not just a pleasant listening experience, but intoxicating to the mind, addictive and immersive from start to finish.

On their debut album, they show an apparent ease in mastering the cold reaches of the universe and conjuring them up at will for the listener; the combination of this sense of grandiosity and the groovy deathcore riffage is an enrapturing mix. Peripety begins with a band poised to go nowhere but up, and by the album’s end, it’s clear that that is, indeed, the direction they’re heading.

For the first time, Kardashev developed a full marketing schedule to release the album with pre-orders, bundles and song snippets prepared for all social platforms at the time. They even made an announcement trailer for the album to get fans excited for their upcoming release.