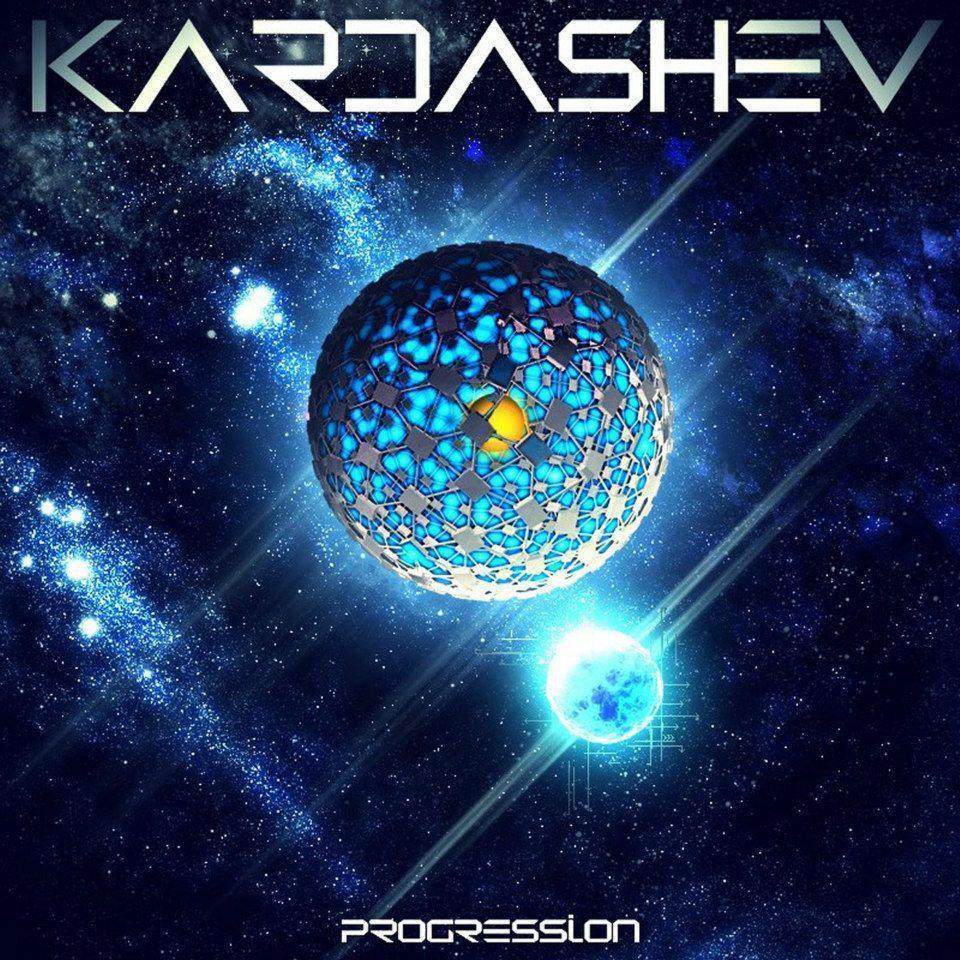 Progression is less of a story and more of a concept. It is a figurative and imaginative layout for describing the concepts found in Nikolai Kardashev’s concept work. Creative license was used on the naming of the songs and the world around which the concepts would be described. Heavy research into Nikolai Kardashev, Ray Kurzweil, Michio Kaku, and other theorists and futurists was conducted to build this theoretically-probable landscape. It would go on to influence most of Kardashev’s future work and was the direct inspiration for their album, ‘Excipio”.

Nico’s high school friend, Dustin Esman, took an interest and asked if he could create a digital track for the album to open with. Something using Foley sounds and textures to ramp into the first song of the demo. That track is “Initiative”.

This album was inspired by music created by Aegaeon, The Contortionist, Fallujah and The Black Dahlia Murder. Kardashev spent much time listening to their music, looking through their artworks and evaluating their delivery and execution. These discussions on the high points of their brands became the impetus that would inspire Kardashev to begin writing.

The structures of this planet
have become complete;
Survived the birth
of harnessing
Earth’s energy.
Calculations
Have brought this civilization
To global scales,
And They prevailed

Past their organic lattices
and those of their beasts
they have harnessed the technique
of using the unseen
to utilize,

Energy consumption is at
four times ten
to the nineteenth power.

Energy consumption is at
the Earth’s command.

The dominant race on Earth
has shown resistance
to eminant progress.
Some sat silent.
Can a race so volitile
reach our advancement?
Can they trace us?

During cultural fusion,
many became one
global nation –
they fought themselves.

The structures of this planet
will soon be obsolete,
they’ll lift a skyward eye,
to a new source of energy,

Cosmic habitats
in orbiting formation;
complexity is elegance.
All transfers wade through space.

Energy consumption is at four times ten to the thirty third power.

Cosmic habitats
in orbiting formation;
complexity is elegance.
All transfers wade through space.

This empire is of every conscious mind.
This empire builds on multistellar resonance.

Pathfinders have reached
the event horizon.

Intercognitive communication.
They speak through silence
in a harmonic concert of
technology and biology.

Energy consumption is at four times ten to the forty fourth power.

And now, are we to greet ourselves?

The recording process for this album was very crude as it began with just recording a practice amplifier into a DAW and then sending the riffage to other members of the band for their criticism and approval.

First, guitar riffs were recorded to a click track in Reason(DAW) and then those riffs were sent to James via Dropbox. He would then import them into Mixcraft(DAW) and write drums with Toontrack’s Superior Drummer software, export the song and then send it back to Nico. Nico would take these raw ideas and arrange them into a cohesive composition and return the final song layout to James so he could write more finalized drum compositions and return the final drum composition to Nico and the other members.

After a few weeks, Chris would arrive at Nico’s house, learn the composition and riffs, record his take on them and then listen to them for a few weeks while developing any additional melodies. At the same time, Mark would be writing his vocal patterns and lyrics.

After a few more weeks, Chris and Mark would come over to record their final takes on the songs.

The recording gear and software for this album.

Having been in bands in the past, Nico and Chris emphasized the importance of not “half ass-ing” their mix and master of the music. They insisted that extra money be spent on the finalization process of the record.

A metaphorical, “Don’t go to an interview with your shirt half buttoned” conversation took place before deciding on how to finalize the sonic sound of the album which lead to researching Mastering Engineers for the record.

In this hunt they considered big name producers like Jason Suecof, Zeuss, and Mark Lewis but instead of arbitrarily choosing a producer based on google SEO results, they looked to some of their favorite band’s records for a mixing and mastering engineer credits. There, on the back of Aegaeon’s “Dimensions of Reality”, they found the credit to Miah Lajeuness in Knoxville, TN and made contact soon after.

Nico and the band learned much from Miah and decided to continue working with him for their future releases.

After writing three full songs and a guitar piece that exemplified space, the group decided it would be important to create album artwork and maybe an intro track that would have a space vibe.

Not having any real idea on what they would put on the album cover, the band again reached out to the community for their input. A few artists that liked the demos offered their creative service and submitted some rough ideas, but nothing really stuck. Instead, Nico reached out to his old work buddy Caspro and asked if he’d like to throw something together for them. He read through the album inspiration and developed a composition based around the second tier of the scale where a superstructure called a “Dyson Swarm” would be illustrated around stars in a vast sci-fi landscape.

Soon, after receiving the masters from Miah, the band began working on promotion and sent their demo to many record labels. They knew that the best modern form of promotion was likely to be a music video and they agreed that a music video was customary for an album release. After brainstorming all the ideas around what a fun, relevant music video would look like, they hired Julio Copelly to film them performing “Tier 3 – Galactic Achievement” on the roof of a Space center in Arizona.

The location chosen for the music video was the roof of Challenger Space Center in Peoria, Arizona as it was a local monument to space and scientific achievement. It had a beautiful, pure-white, roof with access large enough to fit a drum set.

Fun Fact: During filming, the curator of the center came to the roof and surprised the band by asking if they’d begun. When the band replied that yes in fact they had, he explained that he couldn’t even hear them through the glass doors.

The community around Kardashev was beginning to grow as they talked about their upcoming album and made teaser videos to show what they were up to. Eventually fans got involved and began making their own fan art and fan videos. Kardashev will always be grateful to their friends and fans.

To begin with the merchandising process like all local bands, Kardashev printed a total of 25 units of the “Tier 3” shirt designed by Chris Gerlings and made 100 stickers of their logo to sell at shows.