The story of the Album

Excipio was Kardashev’s first EP with a focused effort in writing narrative around the second tier of the Kardashev Scale. The EP is titled, “Excipio” which is Latin for “I rescue” or “I capture” and is lyrically based on the concept of a “Progress Trap“. The reason for this name is that it poetically means, “Sometimes we think we rescue ourselves with technology, but really we’re being captured by it.”

A progress trap is the condition human societies experience when, in pursuing progress through human ingenuity, they inadvertently introduce problems they do not have the resources or political will to solve, for fear of short-term losses in status, stability or quality of life.

The Progress Trap illustration that Kardashev discussed was Buffalo Jumps:

Consider native tribes hunting for food and the resources invested into taking down a single buffalo. Multiple hunters, lots of caloric energy consumption to keep up with the animal and to attack it with melee weapons.

Then, this hypothetical tribe develops spears, and now they can hunt multiple buffalo with ranged efforts reducing the caloric investment for a much greater return in food and materials.

Finally, the tribe learns that they can drive a whole herd of buffalo off of a cliff with organized tactics and then they’d have vastly more food and resources than if they took down only a few buffalo. However, now there are no buffalo left to procreate and thus the food source is gone.

These concepts were the foundation of what this album would be about, but through the lens of Science Fiction.

The album’s narrative takes place in a Tier 2 reality and was lyrically written as a Science Fiction story about a space station titled, “DS-Alpha 12389” which was short for “Dyson Station – Alpha Ring – Position 12389”. In this universe that the band had created, human civilization has reached beyond their own planet for energy from the local star and now they’ve begun building and living on a super structure called a Dyson Sphere which encompasses that star.

Near this space station, a research team finds a single-cell floating in space and after retrieving it, and against their better judgement, cultivating the cell, it grew into a fully formed being over a matter of hours. This creature, humanoid in appearance but short in stature, uses immensely advanced, genetically coded knowledge to create a “Time-Space Machine” for the humans as a gift in return for helping it become fully realized.

This being would come to be known as “The Traveler” in future Kardashev lore.

The humans give the Time-Space machine a name, “The Chiliagon”. Just as the completion of the device is finalized, the Traveler abandons humanity as his capabilities far outgrew that of humans, leaving them to learn and use this new device on their own. Not knowing how to use the machine the humans create an unintended exchange of beings from one plane of existence to another in the lens of a multi-verse theory which destroyed the space station.

Leaping forward thousands of years and finally ready to use The Chiliagon for it’s intended purpose, Humanity uses this leap in technology to develop the “Pathfinder” initiative and spread human memory and genetics into the cosmos.

The space station exists and mankind have finally left the earth for colonization of the stars.

The cell is found and brought to cultivated life.

The super-being takes form and creates a super device. This device is created as an infinite source of energy.

The being abandons humanity and “The Chiliagon” device is used with ignorance by humans causing a fold in reality which destroys the space station by displacing all humans with unimaginable creatures.

Leap forward thousands of years and humanity has developed the “Pathfinder” program to infuse new worlds with human DNA through bio-robotic engineering, by way of The Chiliagon, therefore advancing their culture into a Tier 3 civilization.

A station built
among the stars
for a global civilization.

The power to destroy distinction
within a single cell.

“You are impeding progress!
Your mind is closed!”

“The risk outweighs the benefits.
We do not know what it
will create.”

“I will nourish the cell and bring
this to completion.”

Catalyst of
self sustaining processes
introduced
to accelerate
replication.

This system
is living.
Contiguous.
Metabolic.
Maintaining homeostasis.
Origin –
unknown and in question.
A complex network of
matter and form.

The being that sat before her
was self aware.
Its eyes held consciousness.
A complex inquiry.

“I was not born into wisdom.
Wisdom was born into me.”

Creation without
a true visualization.
one thousand new worlds.

Spacial concepts had since dissolved.
Walkway to the infinite.
Mankind made humble
at sight of endlessness.

One of one million six hundred thousand
Will multiply exponentially.

Distance fades away,
a newly flawed conception.
Precipice. A door.

Immersed in emptiness.
The mass of other bodies pushed aside.
Soft echoing of solitary footsteps.

this hollow station is alienation.
Off world advancement
had trapped her within.

where had such wonder gone?
Every hope had been taken for granted.
the fabric of reality torn apart.

Alone and unprepared.
No restitution.
Mortality of flesh
is realized.

Sphere
of exotic matter
folds the fabric of the universe.

“Know us not by our names
but by the dark that created us.”

Pale flesh abominations
brought forth from other worlds.
initial contact was
met with aggression.

Each being spoke with ten voices,
droning words from their sides.
The depths of space had been
named as their father.

Displacement.
to be alone.
Alone.

Cold.
Empty.
Void.
The Dark that created us.

Ignorance
has collapsed.
resources are
redistributed
to the development of
machinery.
Autonomous self-replication.

“This process will mirror
natural concepts
while guided by
pre-written code.”

“Initiate
the synthesis
of flesh
and technology
with great intent
on finding new life
in our galaxy.”

No longer
a race of complacency.
they grasp at the powers of
opportunity.

they are the programmers
of their own fate –
outside the powers of
evolution.

They have placed themselves
inside their creations.
through synthetic eyes
they have gained sight.

in exploring the galaxy
they return to themselves.

The overall mindset for how Kardashev records music was something like, “We have the tools to create modern sounding, high quality audio and we are willing to afford the price of a professional to mix and master it, so why change that formula?”

This album was written and recorded at Nico’s father’s house while they lived together shortly before Nico moved in with Mark. In the smallest room in the house, on the second floor, Chris, Mark and James would arrive weekly to continue working with Nico on the album. They invited Zach Beam over to document part of the process as their principle photographer/videographer.

The “studio” was really just a simple gaming computer with some boom box speakers setup to playback audio. The real brain of the process was their Fractal Audio Axe FX Ultra which they had purchased from Cory West in A Distant Calm (Game of Tones tour!)

The recording gear and software was the same on Progression as it was for this album.

This album was mixed and mastered by Miah Lajeunesse of Sound Lair.

The album artwork was decided on by Kardashev’s bass player Chris as he was taking a modern approach to Da Vinci’s Vitruvian Man by creating “schematic-like” pieces to show abstract plans for The Chiliagon. These were a blend of sacred geometry, planetary orbit patterns, and a sort of astral compass all layered in to create a fictitious design for a doorway through space-time. 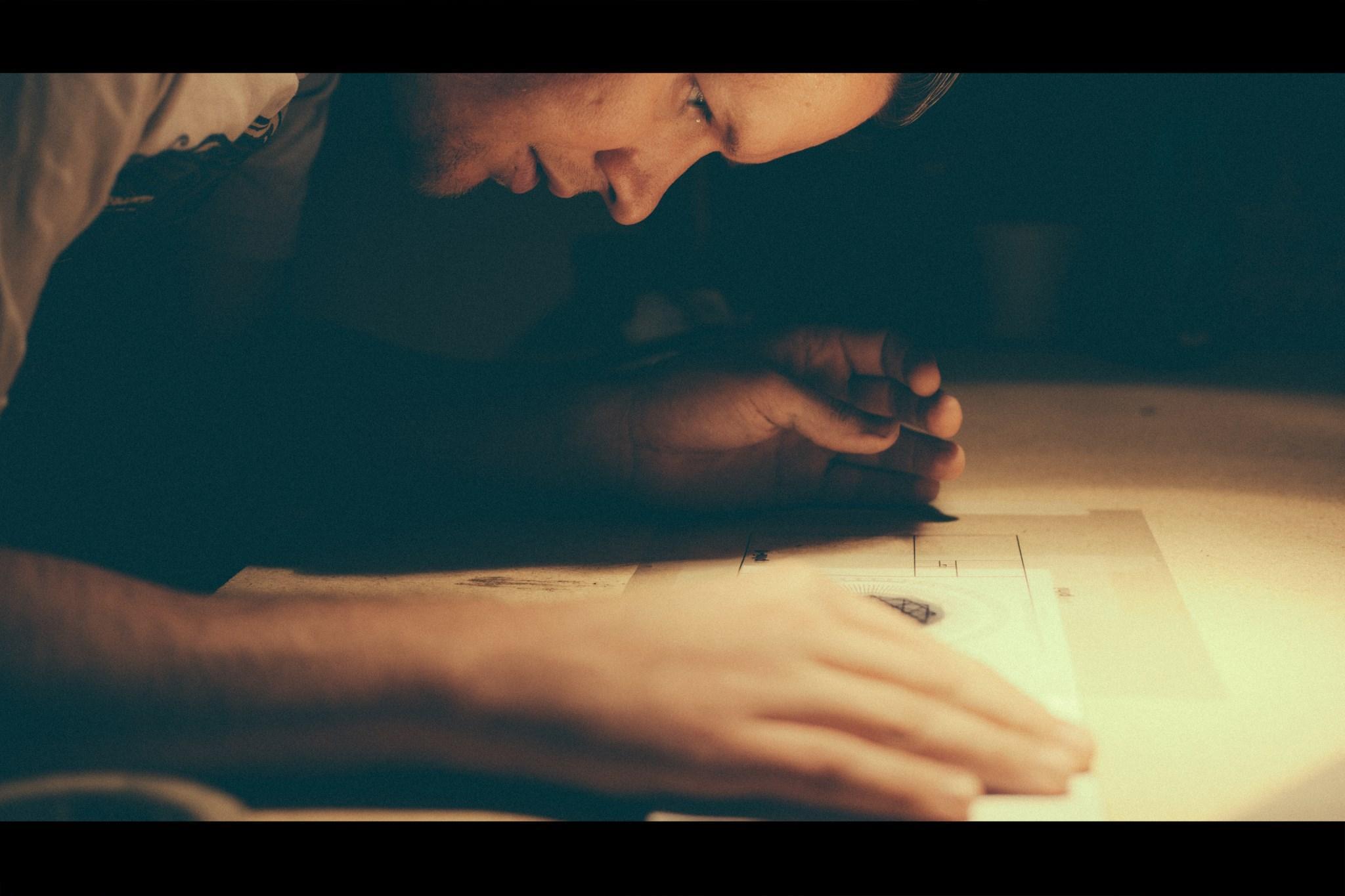 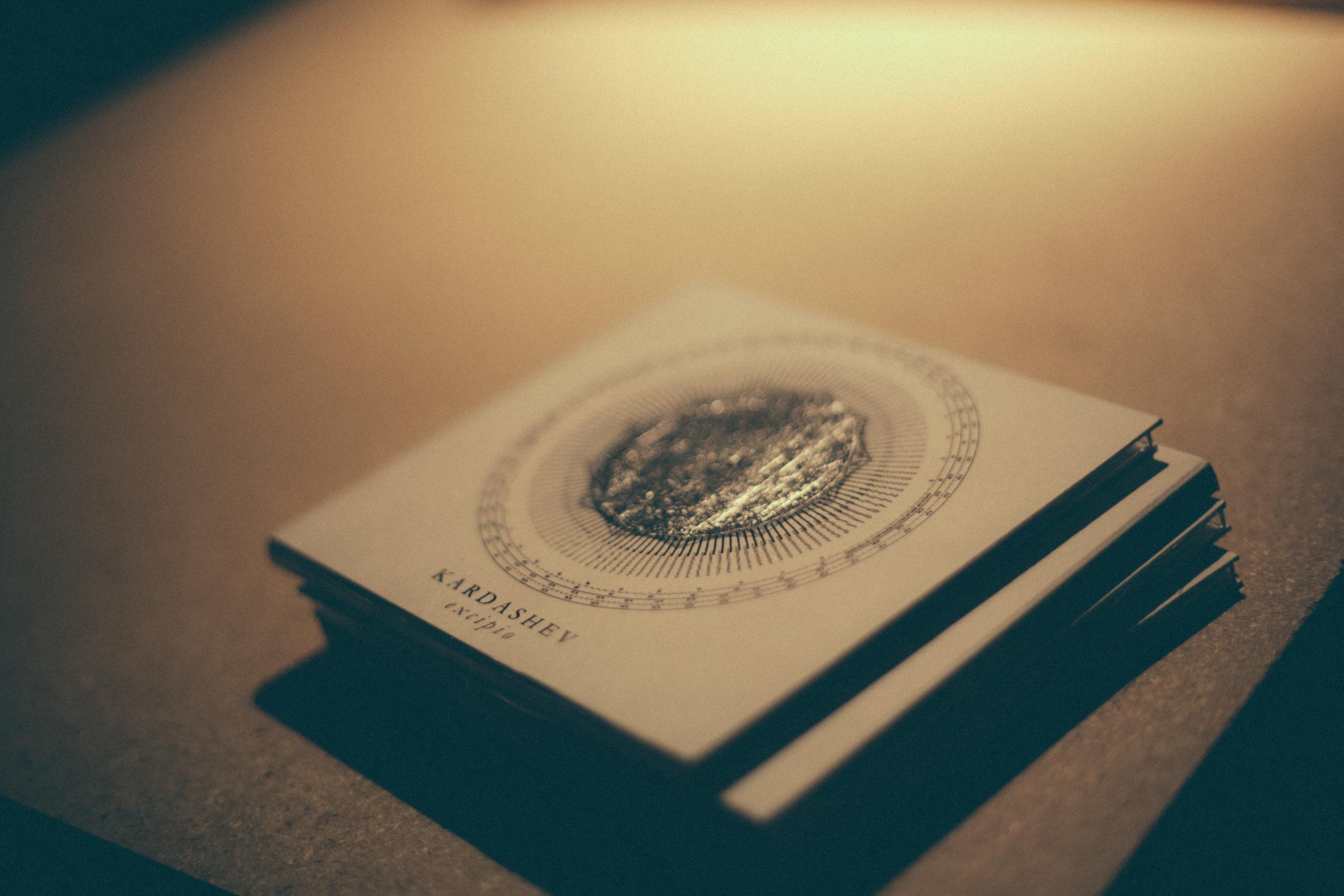 Ambiance washes in and out of these tracks, and atmospheric electronics compliment a pleasant listening experience. A sense of hope generated by synthesis lies underneath these songs otherwise filled with chunky, thick deathcore riffage. This gives Kardashev a refreshing uniqueness in a crowded genre. Keep an ear on them.

Kardashev takes notes from some superior metal icons. I immediately hear influences from TesseracT, The Faceless, & Opeth. A great group of prog influences. This band however, instead of attempting to be those bands, has brought on their own sound. I hear a heavy lean towards the old school melodic death metal side of In Flames. I’m interested to see which road this up and coming metal band takes. Flawless production and an acute sense of all musical genres is making for an awesome new band….Kardashev!!